Peripheral dysostosis (PD) was first described by Brailsford in 1948 as a rare form of chrondrodysplasia characterized by cone shaped epiphyses in the phalanges resulting in brachydactyly [1]. Giedion et al subsequently reclassified this condition as angel-shaped phalango-epiphyseal dysplasia (ASPED), describing the characteristic radiologic findings seen in this condition [2]. ASPED, generally an autosomal dominant condition, is characterized by a typical angel-shaped phalanx, brachydactyly, specific radiological findings, abnormal dentition, hip dysplasia, and delayed bone age. ASPED is thought to result from mutations in the cartilage-derived morphogenetic protein 1 (CDMP1) gene (also known as growth differentiation factor 5 [GDF5]), located on chromosome 20. The protein encoded by this gene is closely related to bone morphogenic protein (BMP) and is a member of the transforming growth factor beta (TGF-beta) superfamily [3]. Herein we report a family with two sisters having features consistent with ASPED, and a mother with a normal phenotype but with severe, early-onset multi-joint osteoarthritis.

We describe a family with two of four siblings (non-consanguineous parents) presenting with features of ASPED, including both brachydactyly and coxarthrosis.

The index case, a 33-year-old female, presented with diffuse joint pain, stiffness, and swelling in her knees and fingers. She reported functional difficulty with opening jars, she was unable to run, and she found prolonged walking or standing difficult. She was of normal intelligence and worked as a garden designer. She had first presented to orthopedic services at 14 years of age with lower back pain, hip pain, and stiffness following long car journeys, and had undergone a bilateral hip replacement in her thirties.

The index patient had previously been diagnosed with PD due to the presence of the characteristic radiological findings, short stature, and brachydactyly. The patient has a sibling who was also diagnosed with PD, as well as two unaffected siblings in this family have a normal clinical phenotype.

The mother (67 years old) of these siblings had a history of severe generalized osteoarthritis. Her symptoms first developed in her late teens with the onset of bilateral knee pain. Radiologic evidence of early onset bilateral osteoarthritis was noted in her twenties and she had required bilateral hip replacements, the first at 45 years of age. She had also required bilateral knee replacements. She had no radiological features of ASPED.

On examination, the index patient was 1.5 meters tall, with a normal head circumference. She had features of brachydactyly in both hands and feet (see Figures 1a and 1b). There was bony swelling at the proximal interphalangeal joints, and movement at both wrists and elbows was restricted. There was no evidence of hyperextensibility of the interphalangeal joints on examination. Hip movements were restricted, but generally functioning well post-surgery. There were small bilateral knee effusions, but range of movement was well preserved. Ankle movements were limited.

Investigations showed normal bloods, including a C-reactive protein of less than 4 mg/L and a negative rheumatoid factor. Radiographs of hands and feet (see Figures 1c and 1d) showed the characteristic radiological features of ASPED in the hands and feet, including the angel-shaped middle phalanx. Moderate degenerative changes were seen in both knees and in the lumbosacral spine. 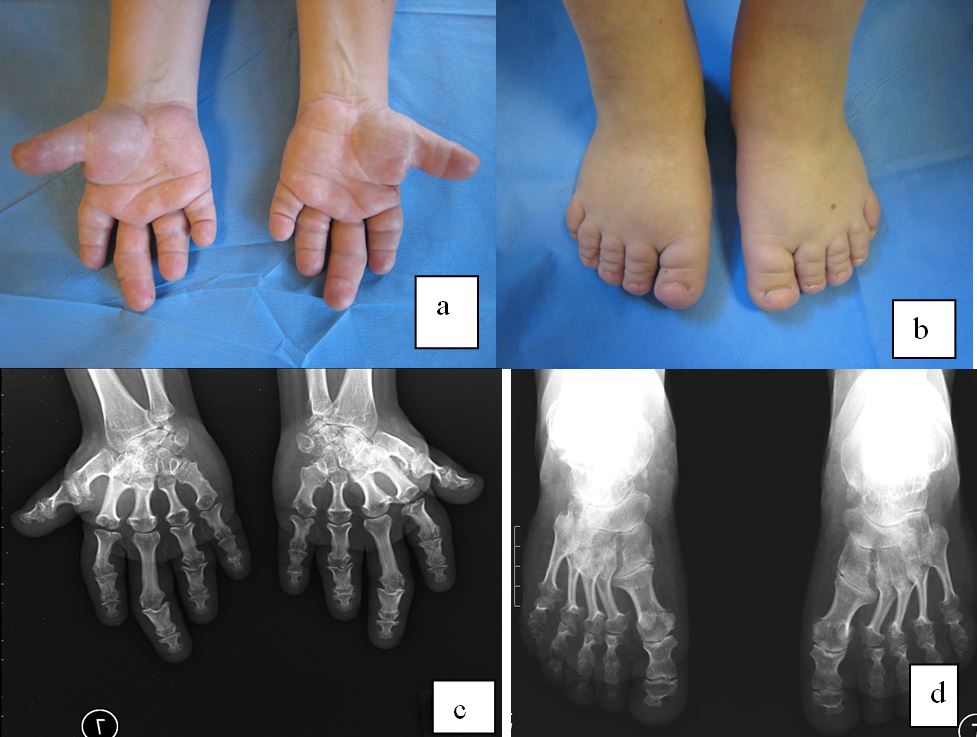 Figure 1: Figures 1a and 1b illustrate short broad hands and feet (brachydactyly) in the index patient. Figures 1c and 1d illustrate the characteristic radiological features of ASPED in the hands and feet of the index patient, including the angel-shaped middle phalanx, short broad tubular bones, marked shortening of metacarpals and metatarsals, and cone-shaped phalangeal epiphyses.

Pain was treated with acetaminophen as required, and oral anti-inflammatory agents as rescue therapy. The patient was referred to the multidisciplinary team, which included physiotherapy and occupational therapy. She received advice regarding lifestyle alterations together with a home exercise program, and she progressed well with this approach.

The patient later developed increasing lumbar pain, which improved following a rhizotomy. There has been no other significant change in her condition over 12 years of follow up, and she has not required any further surgical intervention.

This pedigree illustrates PD/ASPED with associated early onset osteoarthritis in two siblings whose mother has a normal clinical phenotype but who had a history of severe early onset generalized osteoarthritis. Bachman described a similar pedigree in 1957, and coined the term “hereditary peripheral dysostosis” and thus introduced the concept that this was an inherited condition [4]. Singleton et al subsequently described two further cases of PD in 1959, with the mother in one of these reported cases having a deformity of the hands and the feet similar to her child, again suggesting a hereditary factor [5].

The precise genetic mutation in our index case is not yet known. This pedigree and previous reports [8–10] suggest that the involved gene, quite possibly CDMP1 (GDF5), may contribute to normal cartilage metabolism and that a mutation in this gene may predispose carriers to early onset, severe osteoarthritic change.

Familial ASPED represents an inherited condition with chrondodysplasia and abnormal cartilage metabolism leading to early onset coxarthrosis. Identification of the specific genetic mutation involved in this condition may serve as a marker for identification of possible genes involved in generalized osteoarthritis.

Access the latest news and expert video commentary from the EULAR 2020 E-Congress.