Flares are fluctuations of disease activity levels, which have consequences on long-term outcomes in inflammatory diseases such as rheumatoid arthritis (RA) or axial spondyloarthritis (axSpA). Regular monitoring of patients to assess these flares is a key aspect of a treat-to-target approach. But how can this monitoring be performed? In this article, we will explain how connected devices such as wearable activity trackers can help, when coupled with artificial intelligence.

Why are flares important in inflammatory articular diseases?

The evolution of chronic rheumatic diseases is marked by alternated periods of flares and stable disease activity. Flares are of interest to patients and clinicians since they reflect disease activity fluctuations, which should be avoided according to a treat-to-target approach.

These fluctuations in disease activity have deleterious consequences, because the poor control of inflammation may lead to irreversible joint damage and functional disability, which have an impact on patients’ quality of life as illustrated below. 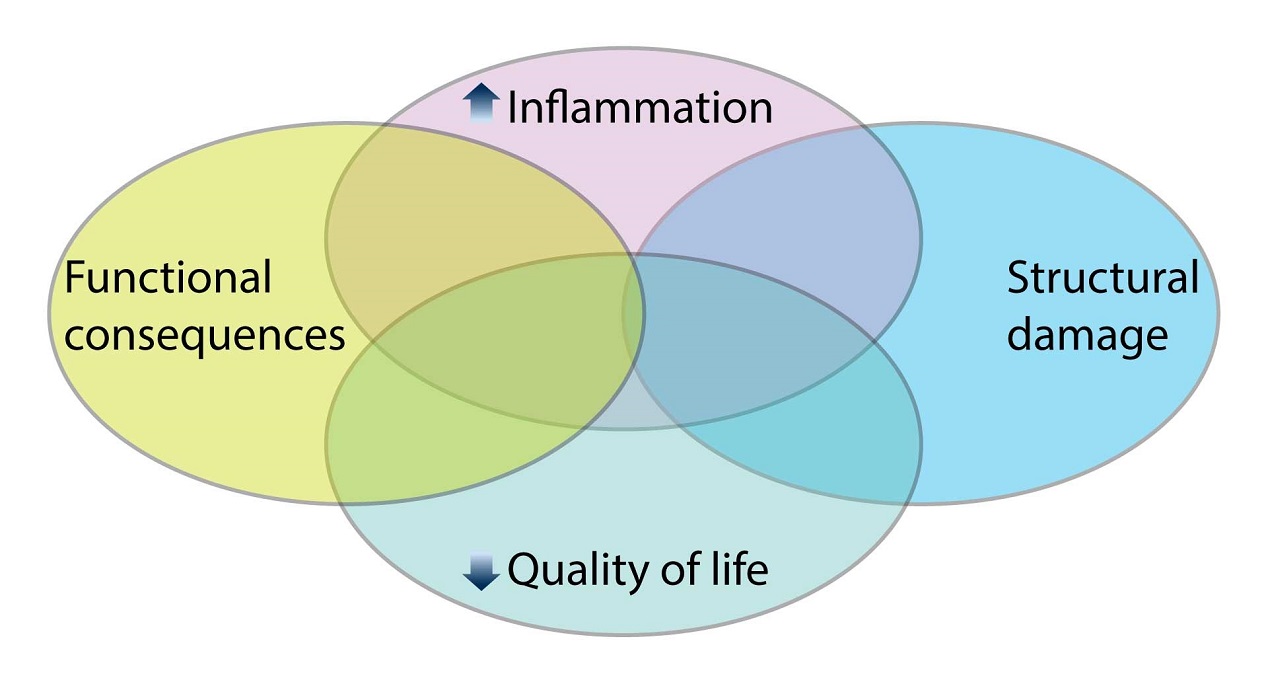 How can we assess flares?

Flares can be assessed by questions or questionnaires, through increases in disease activity levels (increased inflammation as measured; on composite scores), or through modifications in the patients’ lives.

There is no consensus on the best way to assess flares: questionnaires and changes in disease activity status are the usual ways to detect flares, but do not provide the same information. Remote monitoring of patient-reported outcomes may facilitate a treat-to-target approach and help to measure flares, as it enables regular assessment of disease status. However, questionnaires completed remotely online necessitate patient engagement in care, which may lessen over time.

We performed a three-month longitudinal observational study (ActConnect) to explore the link between flares and physical activity measured by activity trackers. Patients with either RA or axSpA were included consecutively within several centers in France. Patient-reported flares were assessed weekly through an app on the patient’s smartphone, which asked a dedicated question: “Has your disease flared up during the past week?”. Physical activity was collected continuously using a connected activity tracker (Activité Pop watch; Withings®, Issy-les-Moulineaux, France) over the 3 months.

During the study we found that:

Most of the 170 patients had long-standing disease and around half of them were receiving a biologic. Although the disease appeared well controlled, patients reported having experienced a flare in 28% of the weekly assessments, on average.

The mean number of steps over three months was 7067 (± 2770) steps per day, and 24–30% of patients fulfilled the World Health Organisation recommendations for physical activity.

3. Flares were related to a moderate decrease in physical activity

At the group level, during weeks with flares, there was a relative decrease in physical activity of 12–21%, corresponding to an absolute decrease of 836–1462 steps per day. However, we were unable to find a precise cutoff value that allowed detection of flares based on steps.

Using AI to investigate the link between flares and activity

In the second phase of the ActConnect study, we analyzed the link between patient-reported flares and activity-tracker-provided steps per minute using artificial intelligence or, more specifically, machine learning through selective (multiclass) naive Bayesian statistical methods.

Artificial intelligence allows analyses of huge amounts of data with minimal aggregation. To explain: with machine learning, the patient’s walking profile and their corresponding response to the flare question over the first weeks are used to ‘calibrate’ the machine, at the patient level. Then, variations in steps and in their patterns are analyzed, and the machine informs you if the patient is flaring, or not.

Such techniques necessitate significant computing power and dedicated programs. In this case, we worked with a telecommunications company, Orange Healthcare (Paris, France). It is remarkable that the machine learning model correctly detected both patient-reported flares and absence of flares with a sensitivity of 96% and a specificity of 97%. The corresponding positive and negative predictive values were respectively 91% and 99% (See table below).

We found that patient-reported flares were strongly linked to physical activity and that patterns of physical activity could be used to predict flares with great accuracy. Automatic monitoring of steps may lead to improved disease control through potential early identification of disease flares, with high convenience for patients since the data collection is passive.

Potential practical applications in the clinic of these findings would include a three-step process.

Of course, this theoretical framework has caveats, including data confidentiality, anonymity, and privacy concerns, as well as responsibilities taken on by the healthcare professionals in relation to alerts (eg, what happens if the physician does not contact a patient after an alert, and the patient is having a heart infarct?)

The use of machine learning to optimize treatment of rheumatic diseases