With upadacitinib now approved for psoriatic arthritis (PsA) in Europe and under consideration by the US FDA, we round up the key safety data on the Janus kinase (JAK)-1 selective inhibitor from the phase 3 studies, SELECT-PsA 1 and SELECT-PsA 2.

A summary of the efficacy data from these studies and other JAK inhibitors in patients with spondyloarthropathies can be found here.

SELECT-PsA 1 was a 24-week study involving 1704 patients with moderate-to-severe PsA and an inadequate response to at least one nonbiologic DMARD who were randomly assigned to receive upadacitinib 15 or 30 mg/day, placebo, or adalimumab 40 mg every other week.

As reported at the EULAR 2020 E-Congress and published in The New England Journal of Medicine in April 2021, rates of adverse events (AEs) were comparable among patients receiving upadacitinib 15 mg, placebo, or adalimumab, but elevated in those given the higher dose of upadacitinib (figure 1). 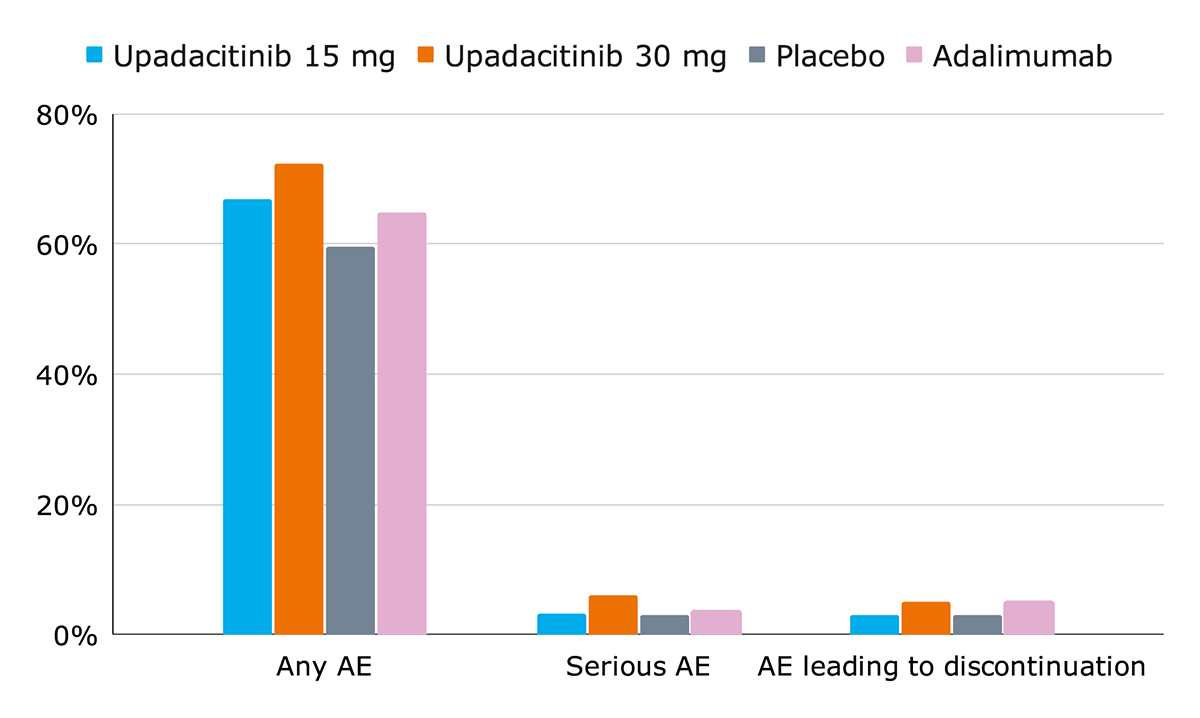 The most commonly reported AEs affecting at least 5% of patients in any treatment arm were:

The investigators report that serious infections occurred more frequently with upadacitinib 30 mg compared with placebo or adalimumab, whereas rates of herpes zoster were “similar” at approximately 1% in each group (figure 2). Three opportunistic infections occurred in upadacitinib-treated patients, including candida urethritis in the 15 mg group and one case each of Pneumocystis jirovecii pneumonia and cytomegalovirus in the 30 mg group. Cancer was reported in three patients each in the upadacitinib 30 mg and adalimumab groups, and one patient each in the upadacitinib 15 mg and placebo groups.

One patient in the upadacitinib 30 mg group experienced pulmonary embolism, while there was one case of deep vein thrombosis in the placebo arm and two in the adalimumab group. No major adverse cardiovascular events (MACE) occurred in the upadacitinib arms. 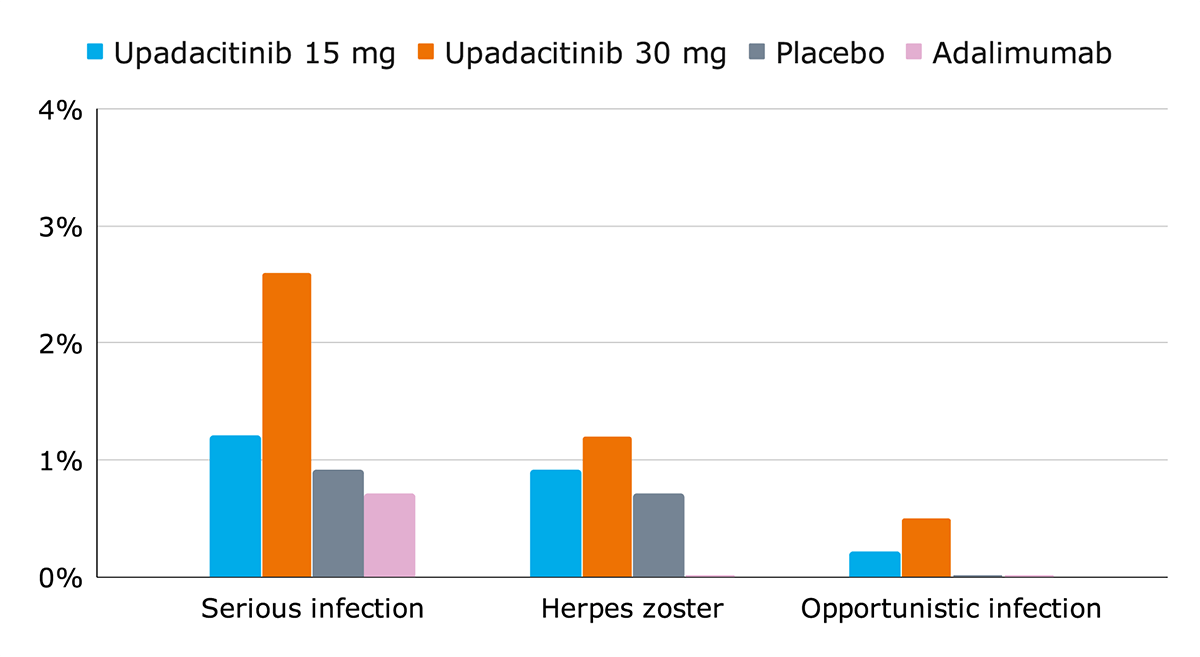 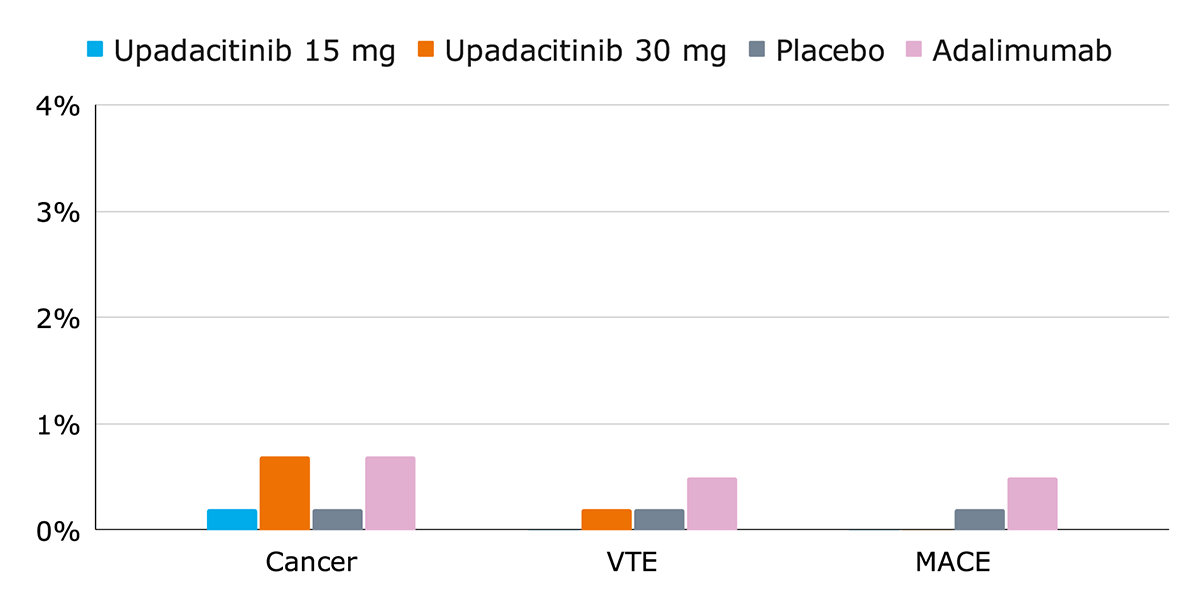 Hepatic disorders occurred in 9.1% and 12.3% of patients in the upadacitinib 15 mg and 30 mg groups, respectively, compared with 3.8% of those in the placebo arm and 15.6% of adalimumab-treated patients. Most elevations in ALT or AST levels were of grade 2 or less in severity.

The SELECT-PsA 1 investigators concluded that “[a]dverse events were more frequent with upadacitinib than with placebo” in the 24-week study, and highlighted the need for “[l]onger and larger trials […] to determine the effect and risks of upadacitinib and its effects as compared with other drugs used to treat psoriatic arthritis.”

SELECT-PsA 2 was a 24-week study in which 642 patients with active PsA and an inadequate response to at least one biologic were randomly assigned to receive upadacitinib 15 or 30 mg/day or placebo. The findings were published in the Annals of the Rheumatic Diseases in December 2020.

Rates of serious AEs and AEs leading to treatment discontinuation in SELECT-PsA 2 were higher among patients treated with either dose of upadacitinib than those given placebo (figure 3). 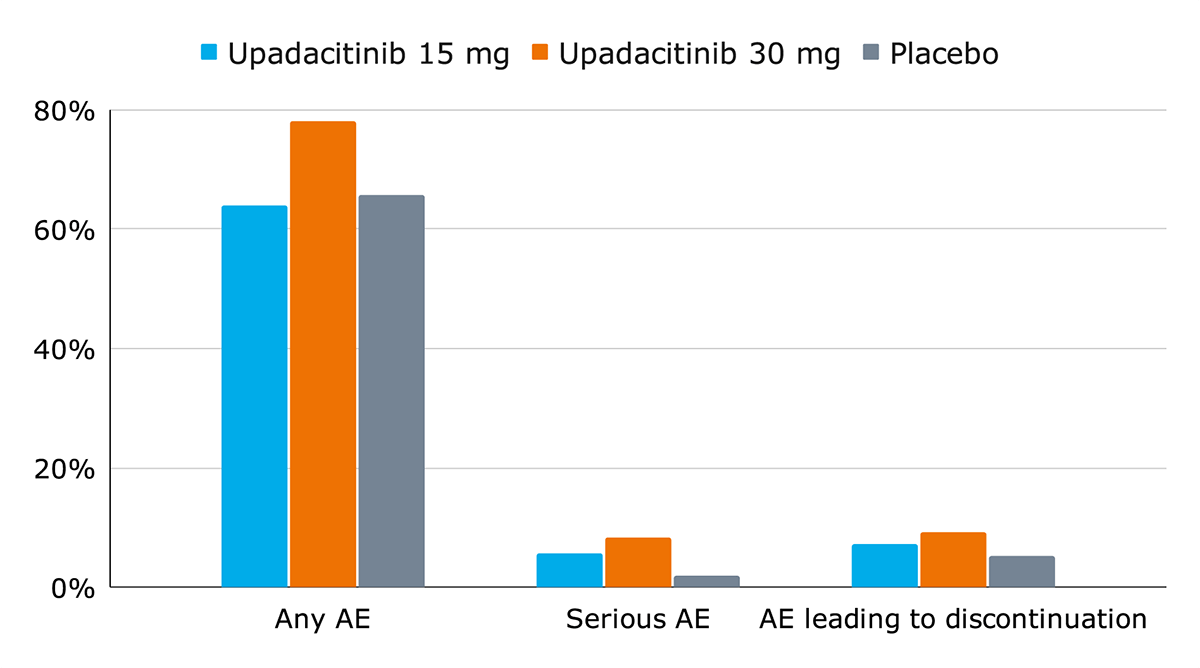 The most commonly reported treatment-emergent AEs occurring in at least 5% of patients in either upadacitinib group were:

The SELECT-PsA 2 investigators highlight that there were higher rates of serious infections, herpes zoster, and opportunistic infections (excluding herpes zoster and tuberculosis) in the upadacitinib 30 mg group compared with the other treatment arms (figure 4). Both opportunistic infections – one case each of candidiasis of the trachea and oropharyngeal candidiasis – occurred in the upadacitinib 30 mg arm, and there were no cases of tuberculosis in the study.

The researchers say that rates of malignancy were comparable in the two upadacitinib arms, affecting three patients in each group. There were no reports of adjudicated gastrointestinal perforations, and there was one case each of MACE and VTE in the upadacitinib 15 mg group. 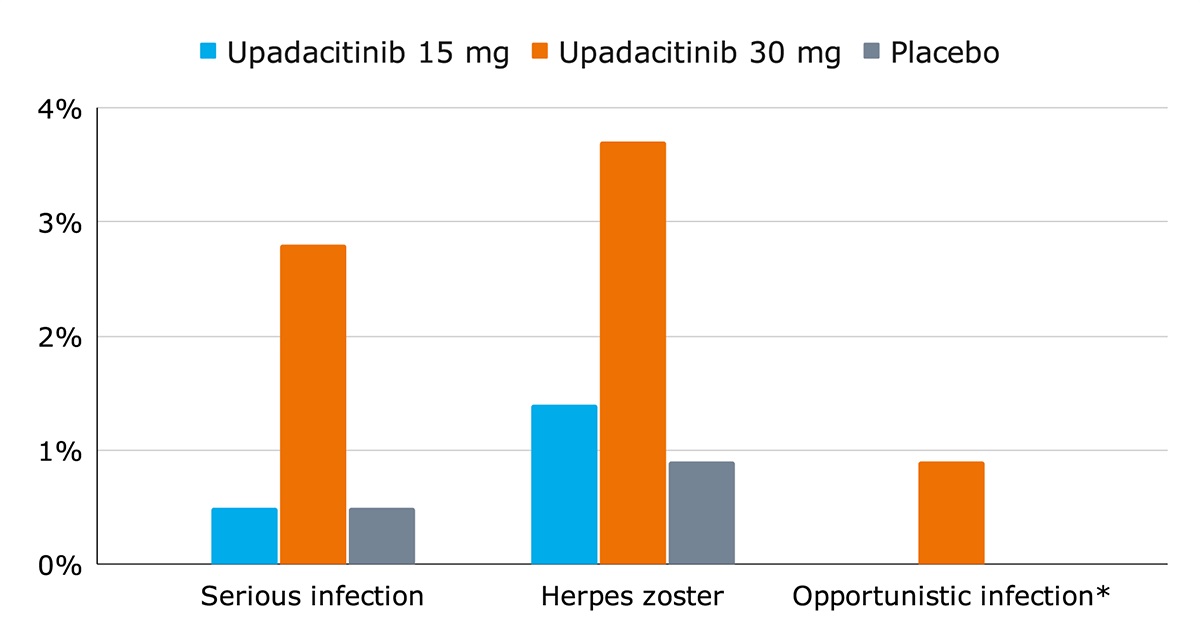 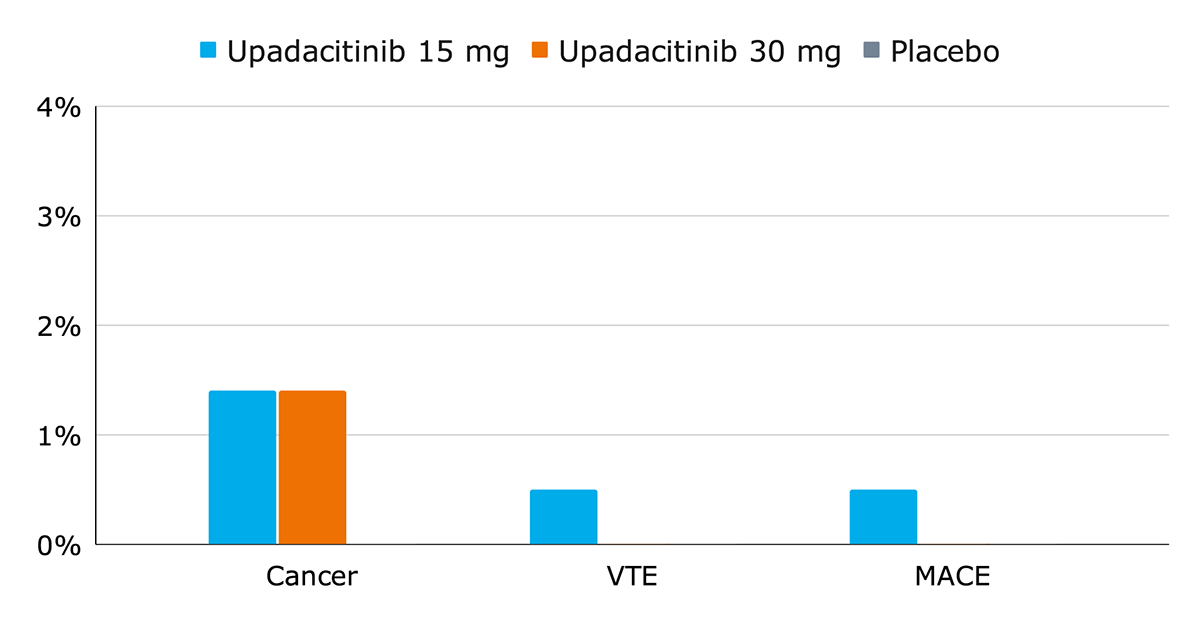 In general, hemoglobin, neutrophil, lymphocyte, and platelet levels “remained within normal limits” during the 24-week study period in all treatment groups, and there were “few” grade 3 or 4 laboratory abnormalities seen in upadacitinib-treated patients, report the investigators. Hepatic disorders occurred in 1.9%, 8.3%, and 1.4% of patients in the 15 mg, 30 mg, and placebo groups, respectively.

After the 24-week double-blind period, placebo-treated patients were switched to upadacitinib 15 mg or 30 mg. The 1-year data from SELECT-PsA 2 were published in Rheumatology and Therapy in April 2021, and the researchers report “no new significant safety signals.”

They say that the risk for serious infections and herpes zoster “appeared to be dose dependent,” with exposure-adjusted event rates for serious infections of 2.6 and 6.1 per 100 person–years with the 15 mg and 30 mg dose, respectively, and a corresponding 3.8 and 8.5 per 100 person–years for herpes zoster. On the other hand, the investigators report “no dose-dependent risks” for MACE, VTE, or cancer. One patient in each upadacitinib group experienced nonfatal pulmonary embolism during the study.