When is the optimal time to withdraw therapy in juvenile idiopathic arthritis patients who have achieved clinical remission?

When a pediatric patient starts a new therapy parents have many questions, one of which is always how long the therapy will last. Currently, there are no guidelines for tapering or stopping medications in juvenile idiopathic arthritis (JIA) once clinically inactive disease is achieved. A recent American survey1 showed that a considerable variability exists among pediatric rheumatologist clinicians regarding when and how to withdraw medications for children with clinically inactive JIA. The majority of responders (75%) waited for 6-12 months of inactive disease before stopping methotrexate (MTX) or biologics. However, the limited data available so far have shown that the rate of flares within 1 year of stopping therapy is very high (50-75%) across studies2-5. Therefore, it is very important to determine the appropriate timeline for medication withdrawal in order to maximize treatment effect while minimizing drug exposure, possible side effects and risk of disease flares. To date, no solid data exist which predict which patients will experience disease flares.

In our study6, in accordance with previous data,1-5 the majority of patients flared within 2 years of stopping therapy (68% within 1 year), with a median time in remission after stopping therapy of 6 months (range 3–109 months). However, among patients with oligoarticular and polyarticular JIA, we identified 24 months as the minimum therapy duration time after achieving clinical remission, as it was associated with a lower risk of flare when compared with other time durations such as 6, 12 and 18 months (Figure 1). This is the key point of our study, since for the first time we have a definitive length of treatment to minimize the risk of relapse. Our data suggest that biologic treatment, in selected JIA categories, should be continued for at least 2 years after achieving clinical remission. In fact, we observed that children who received biologic therapy for more than 2 years after achieving remission, had less flares following cessation of therapy compared with children who received biologic therapy for less than 2 years after achieving remission. In addition, once off therapy, mean time in clinical remission was significantly higher in patients who received biologic therapy for more than 2 years (18.6 ± 3.3 months vs 11.5 ± 2.7, p<0.009). In our study, more than half of patients who flared restarted the first biologic drug or switched to another drug. 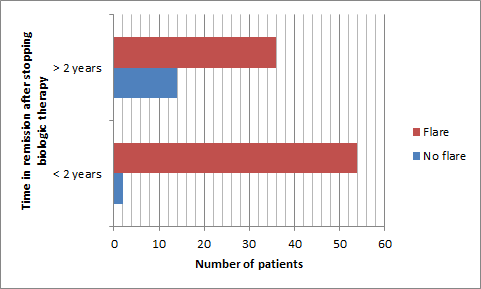 Another important aim for clinicians is to predict which patients will flare. In our analysis, surprisingly, no other variable, including antinuclear antibody (ANA) negativity, total length of treatment, type of biologic treatment and concomitant administration of MTX significantly predicted prolonged remission without therapy. Hopefully in the future, with new inflammatory biomarkers, we will be able to accurately predict disease course and personalize therapy in patients with JIA.

Finally, we want to highlight another finding of our report. Children with systemic-onset disease were significantly more likely to stay in remission compared with those with other types of JIA. This could be due to the fact that systemic JIA often has spontaneous long-lasting remissions, and that it responds differently to therapy when compared with other JIA categories. Our study is promising but awaits further confirmation.